Learn About Your Vitamins and Minerals: Vitamin B5 and Iodine 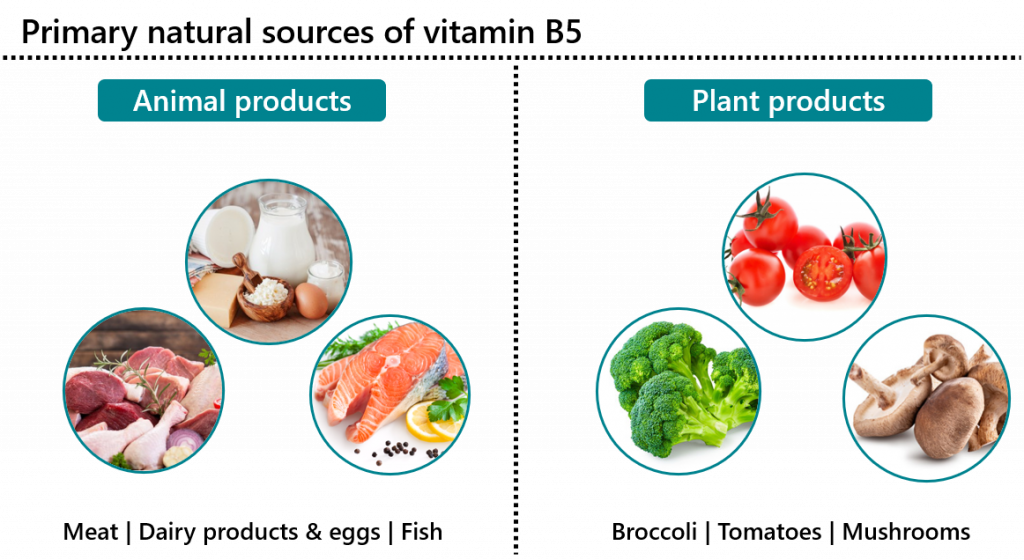 Vitamin B5, or pantothenic acid, is a water-soluble vitamin. It is used to make a coenzyme, called Coenzyme A. Coenzyme A is used by enzymes to build and break down fatty acids and for lipid synthesis. Vitamin B5 is involved in the maintenance and repair of skin and hair cells, healing of wounds, neurotransmitters, synthesis of hemoglobin, and the functioning of steroid hormones.

Although it is quite a heat-stable vitamin, cooking foods with vitamin B5 at high temperatures for extended periods can cause significant losses.

Vitamin B5 Deficiency and Prevention. The deficiency of vitamin B5 is rare because it is well-absorbed from most foods and is added to many fortified or enriched foods. People at risk of vitamin B5 deficiency include individuals with severe malnutrition and people with a genetic mutation known as pantothenate kinase-associated neurodegeneration mutation.

The deficiency of vitamin B5 is usually accompanied by deficiencies of other nutrients. Symptoms of vitamin B5 are headache, fatigue, numbness or burning in the hands or feet, irritability, disturbed sleep, nausea, vomiting, and stomach cramps. Deficiency can be prevented by adequate consumption of foods rich in vitamin B5 or vitamin B5 supplementation. 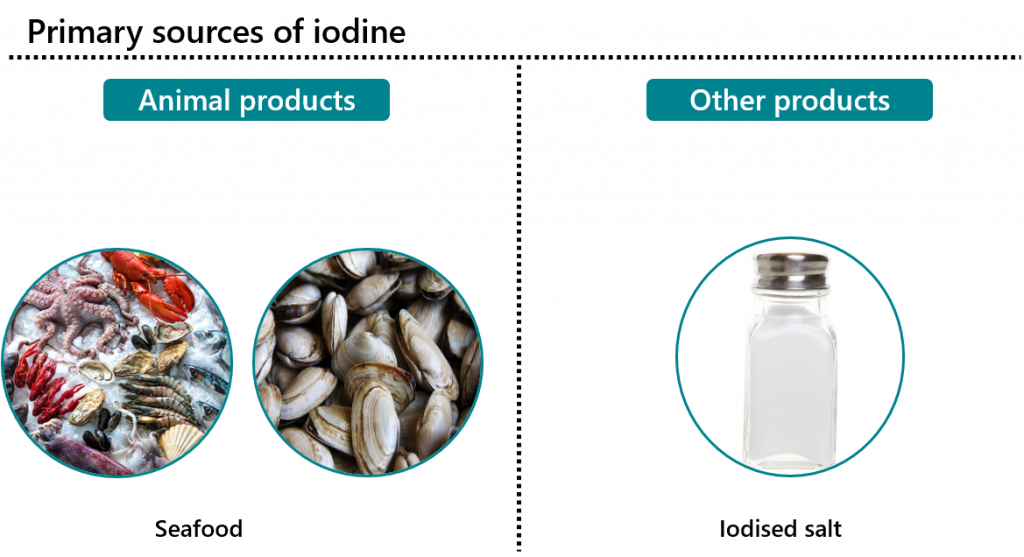 Iodine is an essential trace mineral found naturally in some foods and is necessary for the growth of humans. Iodine is present in several chemical forms like sodium and potassium salts, inorganic iodine, iodate, and iodide (a reduced form of iodine). Iodine does not usually occur as an element but rather as a salt. That is why it is referred to as iodide and not iodine. Iodide is quickly and almost completely absorbed in the gut. Iodate, an inorganic anion of iodine, is also reduced in the gut and absorbed as iodide.

Iodine is an essential component of the thyroid hormones, which are involved in the regulation of many biochemical reactions. These include protein synthesis, enzymatic activity, metabolic activity, development of the skeleton and the central nervous system. Iodine is also necessary for reproduction, immune response, growth, blood cell production, and muscle activity.

Sources of iodine. Good sources of iodine are seafood, fish, seaweed, dairy products, eggs, and iodized salt. Iodine is very bioavailable. The body absorbs more than 90% of the iodine in foods. The thyroid stores about 70 – 80% of the body’s iodine.

Iodine deficiency has multiple adverse effects during pregnancy and can cause serious growth retardation and mental development of a fetus. It can also cause miscarriages and stillbirths. Severe iodine deficiency during pregnancy may cause cretinism. Cretinism is characterized by intellectual disability, deaf-mutism, stunted growth, delayed sexual maturation, and other physical and neurological abnormalities. In adults, mild-to-moderate iodine deficiency leads to goiter, which is a swelling of the thyroid gland that causes a lump in the front of the neck. In most cases, the lump is small and does not cause any symptoms. Severe symptoms of goiter are coughing, a tight feeling in the throat, hoarseness in the voice, difficulties in swallowing and speaking.

Iodine deficiency can be prevented by consuming adequate amounts of dietary iodine and iodized salt in the form of table salt. Table salt is a universal condiment, present in the diets of nearly every population. Therefore, the addition of essential micronutrients to salt is an effective way to reduce micronutrient deficiencies. Salt iodization is considered one of the most successful health interventions of the 20th century, reaching 86% of all households globally.

iChecks can help you to measure the levels of iodine in a wide variety of foods more inexpensively and quicker than traditional laboratory methods. iCheck Iodine can measure iodine, as potassium iodate, in table salt and condiments.

Next in this series, we discuss biotin and chromium.