Learn About Your Vitamins and Minerals: Vitamin B1 and Magnesium

Vitamin B1, also known as thiamine or thiamin, is an essential water-soluble vitamin which needs to be regularly obtained from our diets to ensure optimal health and muscular function. It is a sulfur-containing vitamin which is vital for metabolic activities as it helps break down sugars, fats, and amino acid for them to be converted to energy. Vitamin B1 also plays a key role in nerve activities. One of the metabolites of vitamin B1, called thiamine triphosphate, is essential to neuronal activity by keeping membranes of the neurons healthy.

Sources of vitamin B1. Vitamin B1 can be found naturally in many foods. The primary animal sources of vitamin B1 include organ meats (liver, kidney, heart), pork, and fish. Natural primary plant sources are whole grains, beans, lentils, green peas, sunflower seeds, oatmeal, and asparagus. Soymilk, yoghurt, and fortified foods such as breakfast cereals, flours, breads, noodles, and rice are also good sources of vitamin B1.

The processing of foods may affect the levels of vitamin B1 in the food. For example, vitamin B1 can be destroyed with high-heat cooking or long cooking times. It may leach into water during soaking or cooking, meaning the vitamin could be lost when the cooking or soaking water is thrown away. Even though cereals and grains are good sources of vitamin B1, this primarily refers to whole-grain varieties of these foods as vitamin B1 can be lost during the milling and polishing process where the bran and some of the germ layer that contains vitamin B1 are removed. It is for this reason that vitamin B1 is usually added back in to many processed breads, cereals, and grains.

Absorption of vitamin B1 in the body occurs directly in the gastrointestinal tract since the vitamin is water-soluble. When absorbed into the circulatory system, vitamin B1 moves freely in circulation without carrier proteins in the plasma and in red blood cells until it eventually gets excreted in the urine.

Vitamin B1 Deficiency and Prevention.

Deficiency of vitamin B1 results in a condition called beriberi. Beriberi was first associated to inadequacies of B1 in the diet in 1884 by a Japanese Naval surgeon named Kanehiro Takaki. He noticed that substituting a diet of white rice only with one containing barley, meat, milk, bread, and vegetables nearly eliminated beriberi on a 9-month sea voyage. It was not until in 1897, that Christiaan Eijkman, a military doctor who was working in the Dutch Indies (now Indonesia) made a specific connection of beriberi to polished white rice. He concluded that rice contains an essential nutrient in the outer layers which was essential to human health. When this was removed during processing, the nutrient inadequacies could lead to beriberi. Beriberi is characterized by muscle weakness in the extremities (arms and legs) which is a result of damage to the nervous system. It also causes damage to the cardiovascular system by dilating the blood vessels which in turn causes the heart to work harder and the kidney to retain salt and water, resulting in the buildup of fluid in the ankles, feet, and legs. This condition is known as edema.

Deficiency can be prevented by adequate consumption of foods rich in vitamin B1. Fortifying staple foods (e.g. flour) and processed foods (e.g. breakfast cereals) with vitamin B1, as well as taking supplements also helps to prevent deficiency. 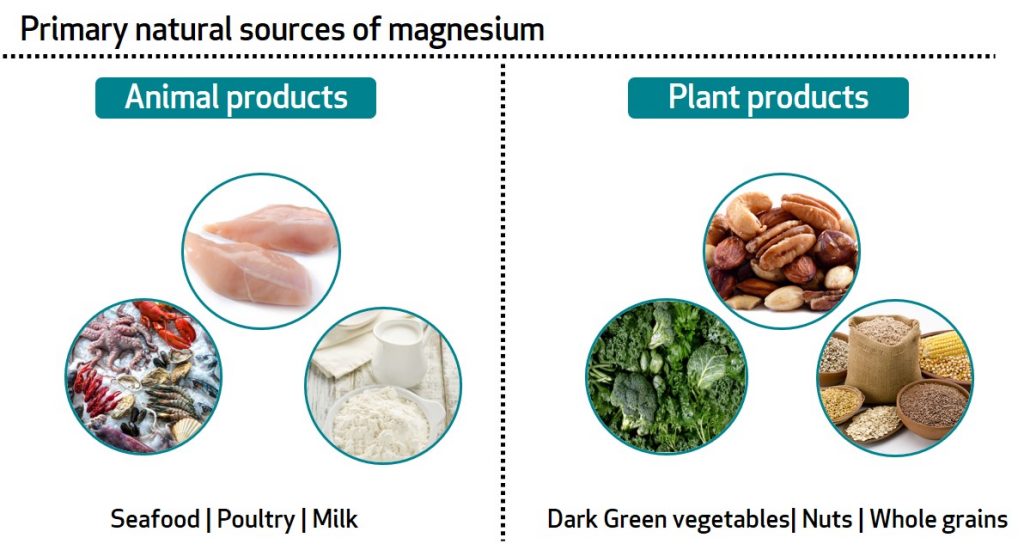 Magnesium is a mineral which is abundant in the body and naturally present in a variety of foods. Much of the body’s magnesium (approximately 60%) can be found in the bones, where it plays a vital role in bone development and maintenance. The rest of the body’s magnesium can be found in the muscles, soft tissues, and extracellular fluids. In the muscles, magnesium acts as an electrical conductor that contracts muscles and ensures the heart beats at a steady pace. Magnesium helps to regulate hundreds of body systems. It acts as a cofactor, assisting more than 300 enzymes to carry out a variety of chemical reactions in the body. These include protein building, synthesis of genetic material (DNA/RNA), cell growth and reproduction, regulating blood sugar and blood pressure, nerve functions, and building a strong immune system. Magnesium is also important for the formation of the body’s main energy compound, adenosine triphosphate (ATP). ATP is needed for all processes in the cells.

Deficiency can be prevented by adequate consumption of foods rich in magnesium, or through supplements.

Next in this series, we discuss vitamin B9 (Folate) and phosphorus.