The EIC (European Innovation Council) Accelerator is the largest and most competitive public funding program for deep-tech companies and start-ups in the European Union, providing funding to <3% of applicants. The Accelerator was launched in 2019 by the European Commission as a funding instrument for small and medium-sized businesses, including startups, mid-capitalization companies, and innovators that develop breakthrough projects with high growth potential. It was introduced under Horizon 2020, the €80 billion funding program set up by the EU for research, technological development, and innovation.

In October 2020, BioAnalyt submitted a proposal to the EIC Accelerator for our iCheck Anemia testing device, joining 4200 other proposals from over 48 countries. All applications were evaluated by an international panel of independent experts, using criteria such as breakthrough nature, the scale-up potential of the project, and quality of the team. Out of the 4200 proposals received, only 0.9% were selected for funding. BioAnalyt’s proposal succeeded in receiving a high evaluation score of 13.5 out of 15, as well as the prestigious Seal of Excellence. The Seal was awarded in recognition of BioAnalyt’s high-quality project, which is highly recommended for funding.

iCheck Anemia, is an innovative, point-of-care diagnostics device for screening anemia and diagnosing its main cause, iron deficiency. Anemia affects 2 billion people globally, causing 68 million years lived with disability and €42.5 billion in GDP losses globally. It is associated with 20% of all maternal death, impaired cognitive and physical development of children, 42% increased risk of mortality after surgery, as well as increased hospitalization and mortality rates. With iCheck Anemia, BioAnalyt is joining the global effort to accelerate anemia reduction by innovating point-of-care anemia diagnostics that go beyond hemoglobin measurement, enabling accurate and robust testing of anemia and its causes in a rapid and minimally invasive way. 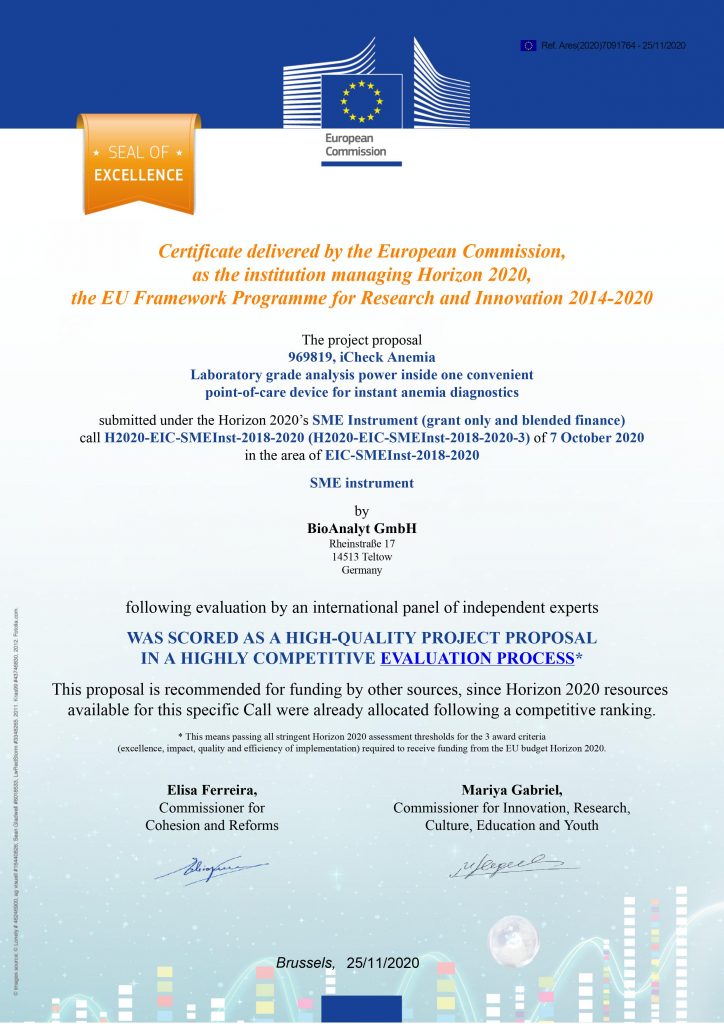