It is estimated that vitamin A deficiency (VAD) affects almost 150 million children worldwide, predominantly in developing countries. Fortification of staple foods such as edible oil and flour has been proven to be one the most effective interventions to fight VAD. Additionally, fortification of condiments or seasonings such as soy and fish sauces, curry powder or bouillon may be a cost-effective alternative or serve as a complement to staple food fortification (1,2). Recent studies indicate that over 95% of the population in West African countries as well as in South Africa consume bouillon cubes on a daily basis. In Nigeria alone, over 100 million Maggi bouillon cubes are sold per day (3,4). These figures indicate vitamins and minerals delivered with bouillon cubes have the potential to reach almost all of the population at risk of VAD.

Quality control of fortified foods is a challenge

For a certain food to be considered an adequate vehicle for fortification, not only the coverage and consumption patterns of the food play a role. The technical feasibility – the effect of an added nutrient on food quality, absorption by the body and the stability of the nutrient in market conditions – is also considered. Controlling the vitamin A levels during food production, in the end product and at the market level can be challenging as vitamin A analysis is complex and expensive, costing up to $100 per sample. The traditional methods for vitamin A analysis are high performance liquid chromatography (HPLC) and spectrophotometric methods with either ultraviolet (UV) or colorimetric detection approach. Qualitative colorimetric methods are also available but can only indicate the presence or absence of vitamin A.

iCheck Fluoro, an innovative analytical method, enables fast and affordable quantitative vitamin A analysis that is no longer bound to a lab. How? iCheck Fluoro is a portable fluorometer that comes with a ready to use reagent mix for extraction of vitamin A. It employs UV detection to quantify vitamin A in the sample within 10 minutes time and at 10% of the cost of using traditional lab methods. Vitamin A forms that can be analyzed with iCheck Fluoro include retinyl palmitate, retinyl acetate and retinol. The method is validated to measure vitamin A in vitamin premixes, liquid and powdered milk, wheat and maize flour, breast milk and sugar. 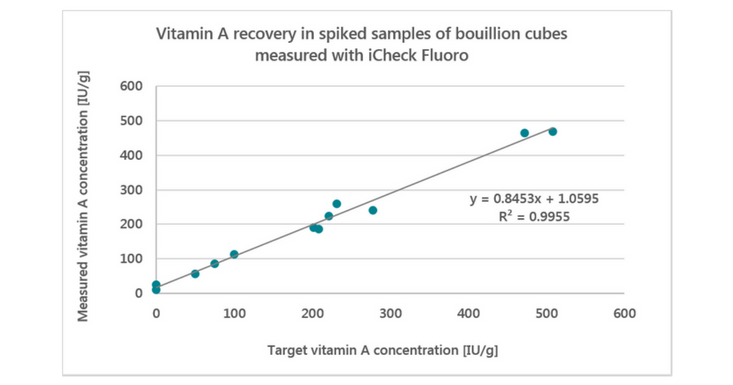 BioAnalyt has recently performed feasibility tests for measuring Vitamin A in bouillon cubes/powder with results show excellent recovery and precision. In order to determine the precise quantity of vitamin A in the bouillon cube, usually in the 50 – 150 mg/kg (67 – 500 IU/g) range, only a simple preparation step is necessary. This step involves dilution of the bouillon cube or powder in warm water (~50 ℃) at a 1:100 ratio (i.e. 2 g of powder in 200 mL water). The solution is then directly injected into the reagent vial and measured with iCheck Fluoro device. The measured vitamin A concentration in bouillon cubes with iCheck Fluoro has a correlation to the target vitamin A concentration with a Pearson correlation of 99% (see the above graph). Accurate and fast measurement of vitamin A in bouillon cubes with iCheck Fluoro has the potential to enable local quality control and coverage studies to assess the impact of fortified foods on micronutrient deficiencies.