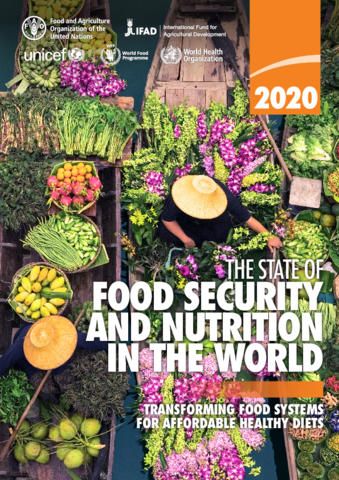 The State of Food Security and Nutrition in the World (SOFI) is an annual report prepared by FAO, IFAD, UNICEF, WFP and WHO with the aim of informing the world about the progress on the goal towards ending hunger, achieving food security and improving nutrition of populations. The report provides in-depth analysis on key challenges for achieving this goal mentioned earlier in the context of the 2030 Agenda for Sustainable Development. The SOFI 2020 Report confirms a trend reported in past editions: there has been a gradual increase in the number of people affected by hunger globally. The report also shows the persistent continuance of the burden of malnutrition in all of its forms. There has been some progress made in reducing child stunting, low birth-weight and exclusive breastfeeding. However, the pace of progress still remains very slow. Adult obesity is on the rise in all regions and childhood overweight is not improving worldwide. Here are our 10 key points from the SOFI 2020 Report:

Click here to learn more about the findings of the SOFI 2020 report.