Learn About Your Vitamins and Minerals: Vitamin B6 and Fluoride

Vitamin B6 is a water-soluble vitamin that exists in three forms: pyridoxine, pyridoxal, and pyridoxamine. All three forms can be converted in the body to the coenzyme pyridoxal phosphate (PLP), which assists about 100 enzymes vital in protein and urea metabolism and the breakdown of carbohydrates and lipids. PLP is also involved in the synthesis of hemoglobin, nucleic acids, etc. Vitamin B6 helps to maintain cardiac function and supports the immune system and brain health.

Sources of vitamin B6. Vitamin B6 is found naturally in a wide variety of both animal and plant-based foods, including beef liver, poultry, tuna, salmon, chickpeas, walnuts, peanuts, whole grain cereals, dark leafy green vegetables, potatoes, bananas, oranges, and papayas, among others.

The human body absorbs vitamin B6 in the small intestines, especially in the jejunum. It is about 75% bio-available in the body. Vitamin B6 is shelf-stable, but can be destroyed by heat during food processing.

Vitamin B6 Deficiency and Prevention. The deficiency of vitamin B6 is not common since it occurs in so many common foods. However, when it does occur, it is usually associated with low levels of other B-vitamins like vitamin B12 and folic acid. People at risk of vitamin B6 deficiency include individuals with impaired renal function and autoimmune disorders, as well as those who drink significant amounts of alcohol. Vitamin B6 deficiency is characterized by microcytic anemia, depression, confusion, skin conditions, nerve problems, and lowered immunity. Deficiency can be prevented by adequate consumption of foods rich in vitamin B6 or vitamin B6 supplementation. 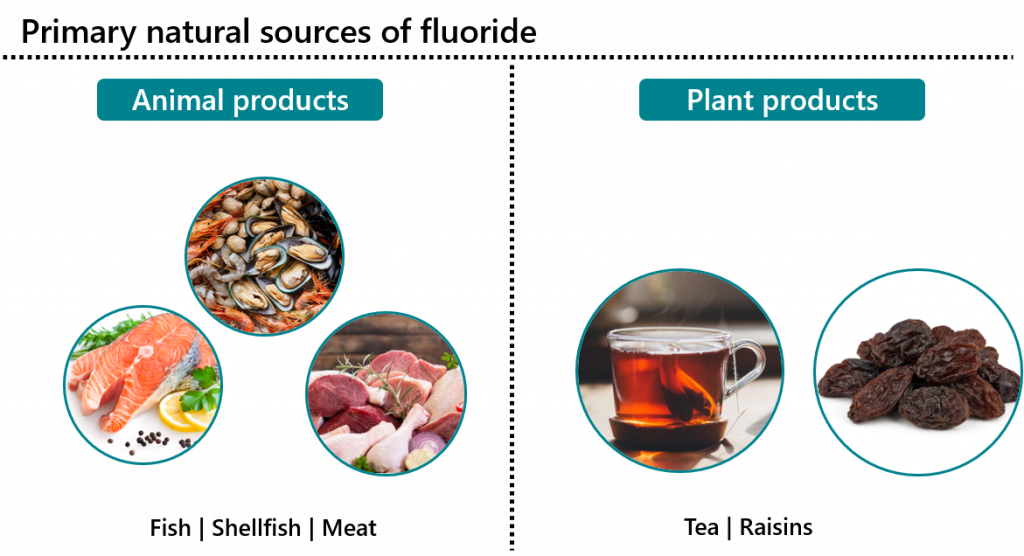 Fluoride is a naturally occurring mineral present in the soil, water, plants, and animals. The body needs fluoride only in trace amounts, but it is a vital mineral for maintaining healthy teeth and bones. It helps to slow the degradation of tooth enamel and rebuild enamel once weakened. It also helps to protect against tooth decay by preventing the growth of harmful oral bacteria. Crystalline deposits of fluoride help in the growth and strength of bones, and can help stimulate the growth of new bones. Consumption of adequate fluoride is especially important for young children as their teeth and bones are forming and rapidly growing.

Sources of fluoride. Fluoride can be found in animal products like milk, fish, shellfish, and meat eaten together with the bones. It is also naturally present in some types of tea and raisins. Fluoride can also be found in varying amounts in the soil and water of different geographies. Where drinking water is not naturally high in fluoride, it is often fortified with fluoride or fluoridated at the municipal level. Many dental products, such as toothpaste also contain added fluoride.

Dietary fluoride from food and water is absorbed both in the stomach and the small intestines. Developing bones and teeth quickly use up about half of the fluoride absorbed by the body. Generally, the bio-availability of fluoride is high – nearly 100% when consumed in fluoridated water and dental products, but decreasing by about 10-25% when consumed in foods like milk with high calcium concentrations.

Fluoride Deficiency and Prevention. Inadequate dietary consumption of fluoride usually results in dental caries or tooth decay. Dental caries are caused by bacteria in the mouth that ferment foods and produce acids that dissolve tooth minerals. Dental caries can cause oral infections, impair growth, and lead to weight loss, especially in young children. Fluoride deficiency can also lead to greater susceptibility to bone fractures if bones become weakened over time. Fluoride deficiency is prevented by consuming adequate amounts of foods rich in fluoride or drinking fluoridated water. Fluoride supplements are often given to children as well to help them build strong teeth.

Excessive fluoride intake can occur, most often in geographic areas with high amounts of naturally occurring fluoride in the soil or drinking water. Consuming excess fluoride can lead to dental fluorosis, a chronic and irreversible condition that damages the teeth and causes the teeth to have white flecks or brown stains.

Next in this series, we discuss vitamin B3 and copper.