Learn About Your Vitamins and Minerals: Vitamin B3 and Copper 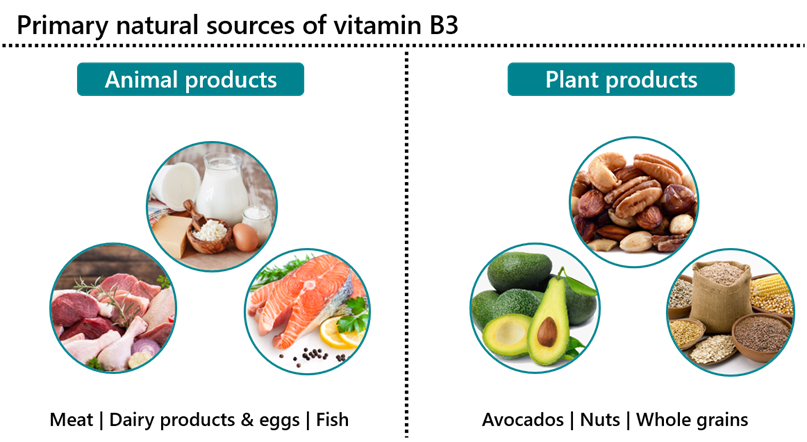 Vitamin B3, or niacin, is a water-soluble vitamin. It commonly occurs in two forms, namely nicotinic acid and nicotinamide. Vitamin B3 acts as a coenzyme, which is needed by more than 400 enzymes for various reactions in the body. It helps to convert nutrients from food into energy and plays a role in the metabolism of cholesterol and fats, the repair and synthesis of DNA, and the antioxidant reactions in the body.

Sources of vitamin B3. Vitamin B3 is found naturally in a wide variety of both animal and plant-based foods, including beef, liver, poultry, eggs, dairy products, fish, nuts, seeds, legumes, avocados, and whole grains. It is also found in fortified cereals and bread. Vitamin B3 can also be produced in the body from the amino acid tryptophan. When tryptophan is present in amounts beyond what the body needs for protein synthesis, it is converted in the liver to vitamin B3 in the form of nicotinamide.

The bioavailability of vitamin B3 is dependent on the food source. Vitamin B3 from meat, liver, beans and fortified products is highly bioavailable. Vitamin B3 naturally occurring in cereal grains may be poorly absorbed because the vitamin can be bound to the fibers in the grains decreasing its absorption. Even though it is a water-soluble vitamin, vitamin B3 is fairly heat resistant and can withstand reasonable cooking times.

Severe vitamin B3 deficiency leads to a condition known as pellagra, which is characterized by dark scaly rashes on the skin, bright red tongue, and changes in the gut which leads to vomiting, constipation, or diarrhea. Neurological symptoms of vitamin B3 deficiency are depression, headaches, memory loss, fatigue, and hallucinations. Deficiency can be prevented by adequate consumption of foods rich in vitamin B3 or vitamin B3 supplementation.

Copper is an essential trace mineral found naturally in many foods, all body tissues, in the soil, water, plants, and animals. It is a cofactor for several enzymes called cuproenzymes. These cuproenzymes are involved in the transportation and loading of iron into hemoglobin. They play an important role in energy production, regulating gene expression, brain development, and proper functioning of the immune system. Copper is also an antioxidant and helps reduce the production of free radicals in the body.

Sources of copper. Animal products like oysters and shellfish, and organ meats are rich in copper. It is also naturally present in legumes, seeds and nuts, whole-grain products, dried fruits, and cocoa.

Copper deficiency and prevention. The deficiency of copper is uncommon in humans. However, some health conditions and factors can increase the risk of copper deficiency. These include a rare genetic defect of copper metabolism called Menke’s disease, or problems in the gut like malabsorption and prolonged diarrhea. A very high intake of zinc and vitamin C may induce copper deficiency by competing with copper for intestinal absorption.

Anemia can also be a clinical indication of copper deficiency since copper is needed to transport iron in the body. Hence a deficiency of copper may lead to anemia. Other symptoms of copper deficiency are abnormal lipid metabolism, osteoporosis, and other bone defects, connective tissue disorders, impaired growth, and loss of pigmentation. Copper deficiency is prevented by consuming adequate amounts of foods rich in copper.

Excessive dietary intake of copper is unlikely. However, copper toxicity may be reported in individuals who drink water containing high levels of copper because of stagnant water in copper-containing pipes and fixtures.

Next in this series, we discuss vitamin B5 and iodine.